I resist the obviousness of GPS as a tool to locate, navigate, identify.  Most interesting to me is when GPS is wrong, as in the case this spring when a K-W woman, travelling in deep fog at the tip of the Brice Peninsula, drove her car into Georgian Bay instead of the Hotel parking lot.

There are so many other ways to identify that have more meaning, make more sense. They pull from deeper source data to inform us about identity.  Navigation there is not by straight, measurable lines.

I live in a place surrounded by water.  It rains and snows more here than any other place in Ontario.  Travel by car in any direction and you’ll find a river (likely with a waterfall), a lake Great or small, a creek or stream – in less than fifteen minutes.

My mother’s family has lived here for six generations before me.  The (scots) paternal side of her family was famous for their foundry, where they made enormous propellers for lake and ocean-going ships “At one time, [Kennedy’s] supplied propellers for about ninety-five percent of marine traffic on the Great Lakes” (Grey Roots Museum and Archives).  Water people.  Industrialists.

Mom’s Maternal side (Pennsylvania Deutch – descendants from German refugees of the 100 years war) not so famously made ladies’ hoisery, employing 200 women at a time when women were organizing to get the vote. A great great great uncle of mine fought for the North in the American civil war; we are making a book of his letters home at the moment.  Dependable people. Steady.

It is in that factory building, on the third floor NE corner, where I have kept a painting/music studio these past eight years.

My parents are retired (and excellent) Highschool English teachers saturated by music, literature and art (Mom – ARCT Piano, Toronto Conservatory; Dad a painter of landscapes and literary references).  My daughter is now twenty, mostly fluent in Japanese, studying modern languages and international studies at U of Ottawa. 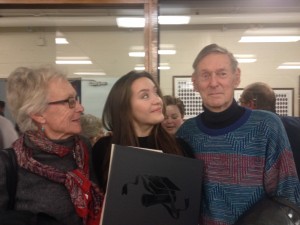 I had a mentor and teacher as a young music student who was fierce like a grandfather to me.  As a young man he used to play violin like Fritz Kreisler in my Great Grandmother Kennedy’s parlour for the WCTU ladies. He later played at my parent’s wedding and made both of my cellos, the first of which was just returned to me last summer after 14 years. (link to that blog if you click on the picture I believe)

Instead of studying cello at Laurier at age seventeen I chose to study Visual Art at York University.  Somehow I felt that the formal study of music would ruin my love for the pure joy of playing it.  I will never know if I was right, but I’ve also never regretted the decision.  I’ve been able to do both in my life and love them equally. Each practise informs the other I’ve found, so I teach musicians how to draw and it makes them better players.

It is this very thing that has led me to a Masters in Community Music – at Laurier, where I chose NOT to study music performance 35 years ago.  I love the way life travels us back to ourselves.

Settling in for the night’s work. Can’t post the portraits themselves, sorry- private commissions, but really really exciting to work on for me. Like icons (Mary Pratt’s approach)